CloudWall is a set of components, combined into a single design document by Ddoc Lab app, running inside CloudWall. So CloudWall builds itself.

Varying set of components and rules, one can build any type of CW-based system: from very relaxed developer stand — to a restricted data kiosk with a single bucket-’disk‘ attached, and only single app allowed.

CW is intended to run in browser with upfront unknown set of apps, so only bullet-proof technologies are used mostly. Also since dev things happen in browser tab, there’s no npm, babel, webpack and all that stuff.

CloudWall runs nice in all modern browsers on all modern platforms, both desktop and mobile, however dev-related stuff can’t run properly on mobile devices.

To read this doc smoothly, please first install CloudWall and download its sources.

CloudWall client side architecture is layered, basically CW orchestrates layer interaction and serves as middleware between storage and apps, also starting and switching those apps. This part is compiled to /cw/cloudwall.js, which is imported from CW core Ddoc lab project.

Before CloudWall session starts, CW runs cw.login() method, which is served as a separate script /cw/start-couch.js, to make authorization more flexible. The script is also imported from CW core Ddoc lab project, however may be changed in special builds (ie CloudWall for static hosting uses this feature to fake auth, because there‘s no CouchDB).

CloudWall requires a lot of libs, which must start before CW. Absolutely required libs are served at start as /lib/general.js, less required — as /lib/plugins.js. Apps may require not yet loaded libs, and they may be served either from local doc, or from remote if absent in client’s browser.

At a client side CloudWall reads user profile and creates several virtual API endpoints, buckets, pre-defined in profile. A bucket may be strictly remote, with no offline capabilities. Also a bucket may be local and sync with one or more remote CouchDBs, or with other local buckets.

Per-bucket sync settings are stored in user profile and are very fine-grain configurable. Sync may be uni- or bi-directional, filtered or restricted by doc _id-s list, intermittent or continuous.

CloudWall apps and components are JSONs of jquerymy manifest structure. If an app/component received from a bucket doc, the doc should have type:"manifest" and special doc _id.

CW keeps separate sets of apps/components for each bucket. However, apps/components of system cw bucket, and apps pre-loaded and cached by ‹script›, are visible system-wide.

To see all system-wide available components, type $.my.cache() in browser console. Apps are also components, but not all components are apps — ie color picker or image cropper.

Applications are divided into two classes: ‘just apps’ and editors.

Editors are generally bound to a specific doc type, and can create, open, edit and save doc of that type. One editor app instance edits one doc at a time, however there can be many instances of one editor per bucket.

‘Just apps’ are not bound to any specific type, they do not edit docs, at least directly. There can be only one running instance of an app for a bucket. For example, bucket shell (list of docs) is ‘just app’.

CloudWall starts (or switches to) this or that app, reacting to URL hash change. After receiving something like #lab/Inliner/someDocId CW will try to start Inliner app in the lab bucket, and open doc with _id:"someDocId" from that bucket for editing.

Running apps are shown as tabs in navbar. Closing a tab closes the app, but editors ask for save if the doc was changed.

Some apps and components are required for any CW-based project. Any build must have at least navbar and shell. Also builds with several buckets need a dashboard to switch between buckets, also some dialogs are needed, attachments manager, etc.

There is a list of components, generally present in any build:

Critical build components should be delivered using static ‹script› inclusion, not using replication. they should be present before cw.start call.

CloudWall requires its users to be authorized in this or that way. After user logs in, CW loads runtime config and user profile, which both determine how system will behave. Authorization is decoupled from core and is located in /cw/start-couch.js script.

Profile JSON may come from two sources: it can be forcibly taken from remote on start, thus being non-writable, or be local and writable. Latter is good mode for admins and devs, former — for ordinary users.

Writable profiles are stored encrypted, that is why CW asks not only for CouchDB login/paswword on strt, but also asks for PIN. PIN is needed to decrypt profile.

Profile contains a list of user’s cryptokeys, buckets and their syncs, it doesn’t contain lists of allowed apps, doctypes, and actions. Access rights for particular apps and doc types are defined in runtime config, separately from user profile.

Dev set of CloudWall has several samples of both relaxed and restricted CloudWall-based systems, as Ddoc Lab projects. All samples have a lot of comments inside and can be easily cloned, and then tuned to build a new project.

Generally, CW-based project includes static assets, CW config and profile generator, and a subset of apps. Critical applications and components are frozen and included as static assets; less critical apps may be delivered to a user as JSON manifest docs, via bucket sync.

Ddoc Lab, the main build tool that includes own IDE, represents each target design ddoc as a source doc of type:"ddlab", which is then processed by Ddoc Lab build tool, which is of webpack complexity. Ddoc Lab ui of this site source project looks like this (click to zoom): 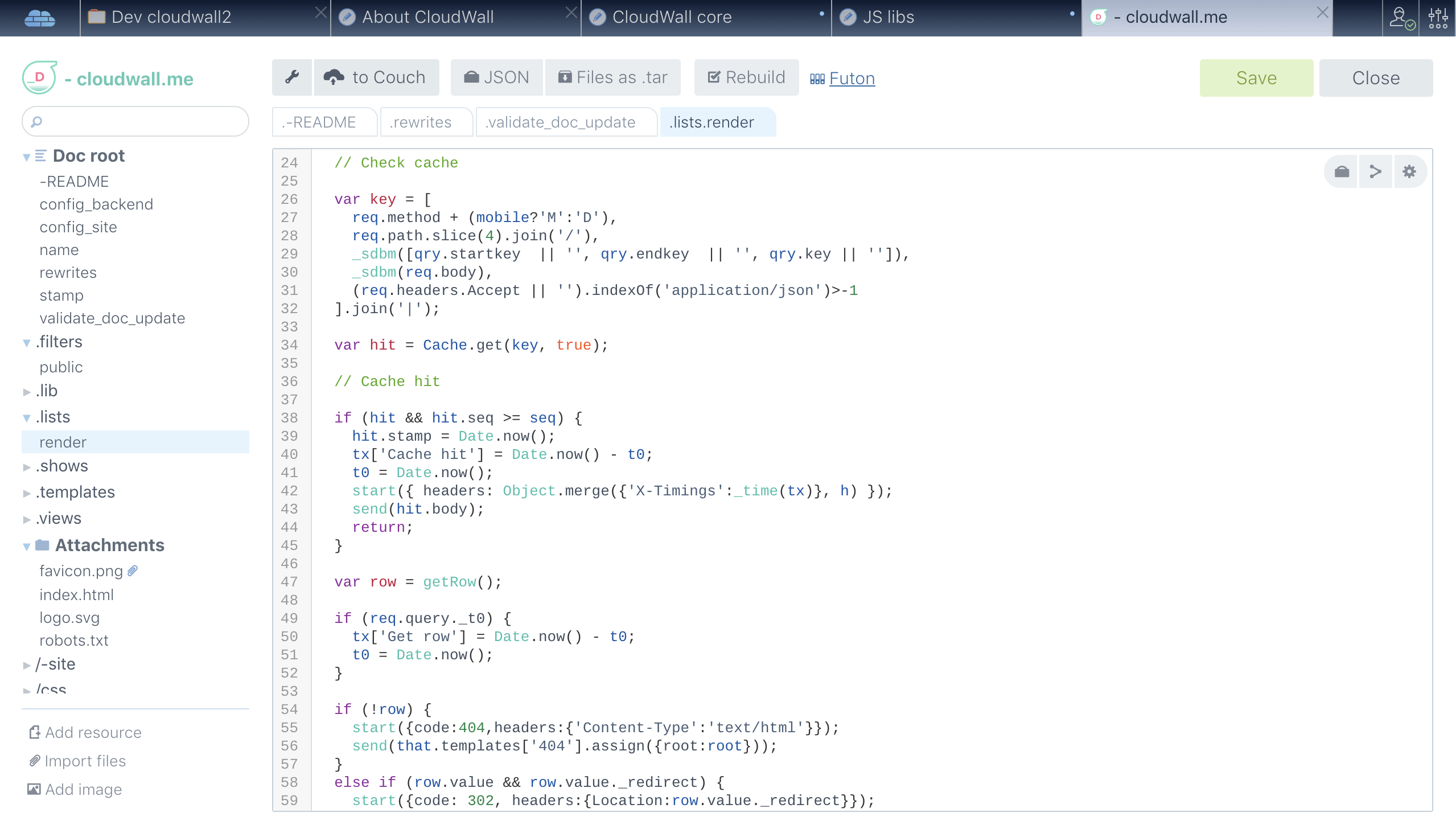 CW has built-in app, Photon, which is very useful for re-starting deployment sync tasks. Photon can run both under CW environment and as a standalone.

Most CW-based projects, both as sources and when built, are basically sets of CouchDB docs (often 1–3 design documents when built). Apps being distributed using same replication flow as ordinary docs, have some unique advantages:

CloudWall uses own CSS styling, derived from Atomic CSS and sharing its ideas, however bit simpler. Most frequently used props are defined as shortcuts, non-semantic ‘isotopes’.

Gradation is different, starting from 1px for smaller values.

All that rules, and also rules for UI plugins onboard, are contained in /css/general.css stylesheet. The stylesheet is built from CW general.css Ddoc Lab project, so may be cloned, tuned, re-built and re-included in custom build.

CouchDB key feature is ease of replication, which, from security POV, means data can easily leak. Insufficiently tested filter function, improper bucket security and handreds of other reason may cause leakage.

Having copy of data locally adds even more risks.

To ensure sensitive data can’t be read even on occasional unwanted replication, CloudWall has built-in crypto lib. It forces encryption of all sensitive user profile docs on save, and can be optionally applied to encrypt some user docs.

CloudWall plays especially well in part with Couchbox, which augments native CouchDB query server with hooks and API constructor. Since Couchbox, as native CouchDB, uses design documents for hosting code, entire Couchbox-based system may be developed right in the browser.

There are several examples of very successful use of this scenario.

// here should be full list with annotation, to be written